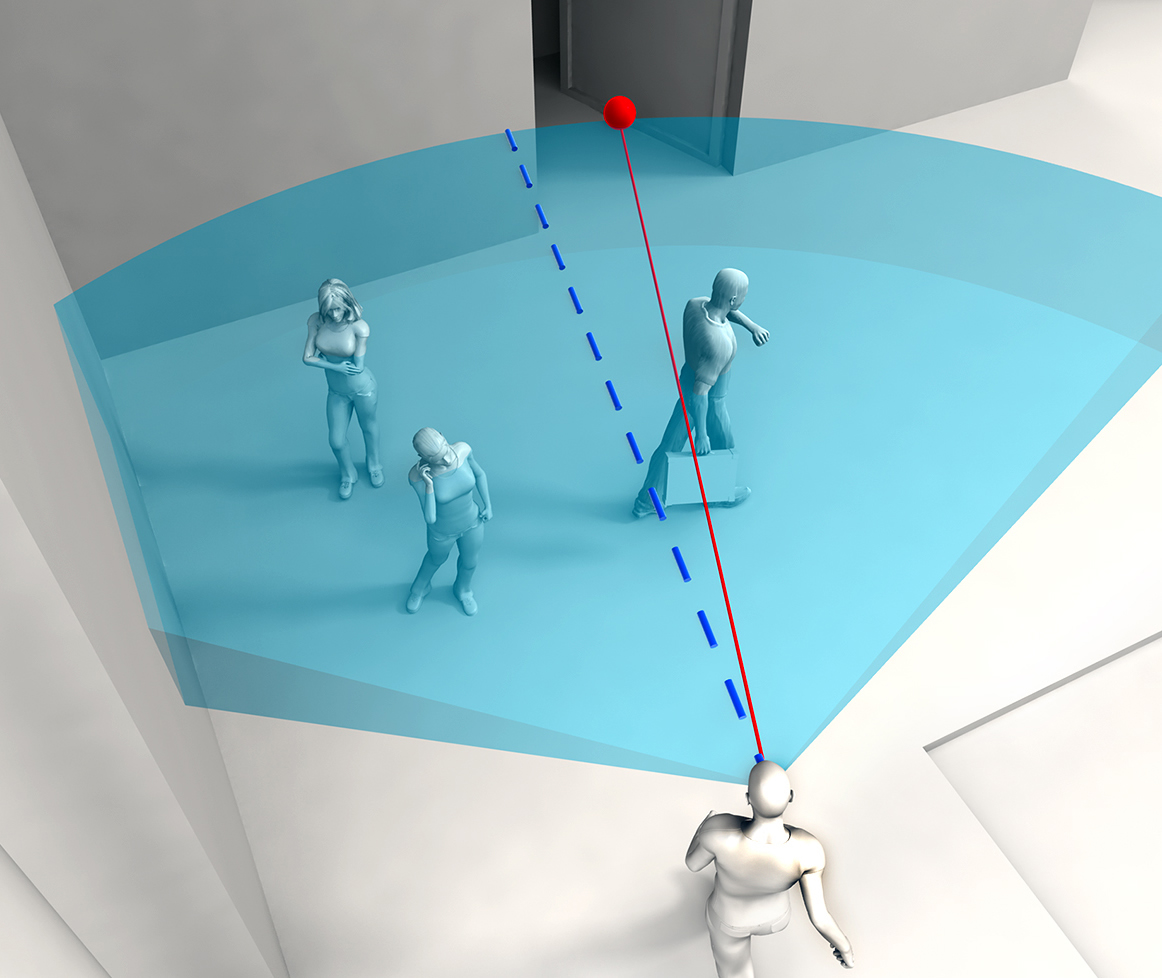 Modeling crowd behavior ? What does that mean?

Well it’s pretty simple, modeling consists in finding a proper description of how a pedestrian behaves in a crowd: How he navigates, avoids obstacles, or when he starts to panic. In particular, a “good” model should be able to predict the emergence of known collective crowd behavior, such as lane formation or crowd turbulence. Elaborating a good and reliable model is essential for two very important reasons:

Therefore, a good model is the key to many theoretical and applied insights.

All right, so how do we build a model?

Today, much of the existing models are based on a small trick: an analogy with physical systems. The main idea is to consider that the movements of a pedestrian in the crowd are similar to movements of a particle in a gaz. Based on this assumptions, it is possible to make use of tools from Newtonian mechanics to describe the behavior of a pedestrian by means of attractive and repulsive forces. The pedestrian is attracted toward a destination point, but at the same time repulsed by other pedestrians. And it works pretty well. Today, force-based models are probably the most dominant in the scientific literature.

Great! So what’s the problem?

The problem is that pedestrians are actually not particles… To describe precisely the movements of a pedestrian with Newtonian forces, one usually needs pretty sophisticated equations of motion, which are hard to calibrate. Moreover, the movements of simulated pedestrians during computer simulations look pretty artificial and sometimes obviously not realistic.

Recently, we though it could be worth spending some time to elaborate another approach for modeling pedestrians’ behavior. And the idea was pretty simple: Instead of treating human beings as if they were molecules, let’s treat them as if they were human beings… 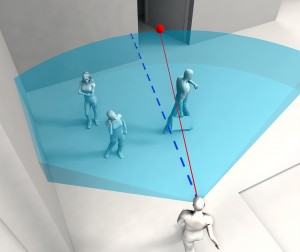 The model we suggested is pretty simple. The first step is to describe mathematically the visual information a pedestrian has in a crowd. For this, we defined the limits of the vision field and compute the distance before collision with all other individuals and obstacles. This constitutes the main visual input used by the pedestrian to navigate.

Next, we assumed that the pedestrian rely on simple movement rules to adapt his walking speed and direction, based on the visual information previously calculated. The first one: choose a walking direction that minimizes the coverage of the vision field without deviating too much from the destination point. The second one: adjust the walking speed to keep some safety distance with the closest obstacle or individual.

These rules are called heuristics – a term of cognitive science describing rapid decisions that people make without much thinking about their behavior. Finally, in order to reproduce realistically crowd motion in situations of overcrowding, these navigation rules are combined with the physical forces that occur during unintentional body contacts among people in dense crowds.

Numerical simulations of this model show that this simple framework is able to generate a large variety of collective behaviors, such as the spontaneous separation of opposite flows of pedestrians in bidirectional traffic (as shown in the movie below).

Interestingly, the model also predicts that above a threshold crowd density (around 3 people per square meter), a transition from smooth flows to stop-and-go waves happen, as it has been observed in real crowds. Moreover, as the density increases, congestions emerge, followed by chaotic crowd instabilities, similar to the phenomenon of crowd turbulence previously observed during crowd disasters. The model could help urban planners to design better exit routes for evacuation of large crowds from buildings and to adapt the environment for a safe planning of mass events. For example, it allows for the identification of zones where the occurrence of crowd congestions is likely, as shown in this last illustration.

All right. So your model is the best one, right?

Not at all! This model has several drawbacks as well. First of all, the model is hard to program. Even through the human brain can easily compute expected collision times with moving obstacles when we are walking in a crowd, it’s pretty hard to implement in a computer program. I did manage it finally, but it requires heavy computational power and is prone to programming errors. This technical limitation hinders the future development of the model. Moreover, we are not sure that the behavioral rules assumed in the model are the ones actually used by pedestrians. And finally, just like the social force model, there are some simulation inconsistencies from time to time..
Well, I would say there are some advantages and disadvantages in using it, but the model is pretty young. It require to be polished, confronted to empirical data, optimized, etc.. Hopefully, it will be improved in the near future!