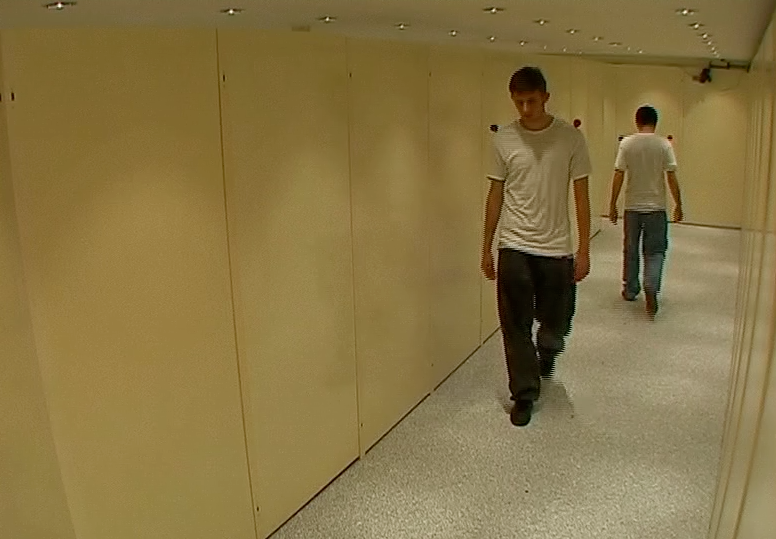 Today, I would like to talk about my very first research project. I undertook it during the first year of my PhD thesis, at the University of Toulouse and at the ETH Zürich. The main question we addressed in this work is very simple: How do people avoid each other?

In fact, if you think about it, avoiding a collision with another pedestrian when walking in the street is a pretty complex cognitive task: It requires 1/collecting various information about the walking behavior of that person, 2/ anticipating what he or she is going to do, 3/ processing all these information in real time, and 4/ adapt you walking behavior accordingly by choosing an avoidance side and changing your walking speed and direction. And most of the time, you just have a few seconds to take your decision.

Interestingly, this task comes down to a coordination problem. The pedestrian has to choose a passing side: “Should I avoid that person on the right- or the left-hand side? ” If both individuals choose the same passing side, the avoidance is a success. If they choose different ones, the risk of collision is increased. OK, but you don’t know what the other one will decide… and he is actually facing the same problem! So how do we do? And why do we choose correctly most of the time, without even being focused on the problem?

To investigate on this issue, we have conducted a very simple pedestrian experiment. In the lab, we built a simple experimental corridor and hired about 40 participants. Then, we selected randomly two of them, put them at each end of the corridor, and instructed them to walk to the other end at the starting signal… and repeated this procedure many times, for each pair of participant.  Of course, they had no idea that we were actually observing how they avoided each other in the narrow corridor. The experiment looks like this:

The analyses of the video recordings highlighted a clear bias in the avoidance side. Without talking to each other and even looking at each other, 81% of the participants (they didn’t know each other) spontaneously choose to evade on the right-hand side. This behavioral bias is called the side preference. It’s a simple cognitive shortcut that helps to reach a rapid decision without thinking too much: “When you are not sure, go to the right!” And because the majority of people apply the same strategy, the coordination is achieved successfully almost all of the time.

The side preference is a behavioral convention, or social norm. In other words, it’s an implicit behavioral rule that is shared by the majority of people without being explicitly imposed by any central authority.

Does the side preference of pedestrians derive from car traffic rules?  In fact, the side preference is a cultural feature of crowds: In some countries, pedestrians avoid on the right-hand side (like in France, where the experiment has been conducted), and in some others they prefer the left-hand side (like in Japan). However, it’s not always consistent with car traffic. In Great Britain for example, and London in particular, people walk on the right-hand side but drive left (as shown in the photo of Oxford street, London).

In the end, it is likely that car traffic rules have some kind of influence on pedestrians’ habits, but it is probably not the main mechanism. The most plausible theory, to my opinion, is a simple self-reinforcing learning process: Initially, people choose at random (as young children do). If, by chance, they choose the same side, the probability for choosing that side again in future interactions is increased, otherwise it is decreased. With this process, over repeated interactions, most people will develop the same preference in the end. As both sides are equivalent in the beginning, the theory predicts that different preferences emerge in different regions of the world, as it is actually observed.

Interestingly, the side preference is not just “a detail” of crowd dynamics. It has some importance consequences. In dense bidirectional flows of people this bias is amplified, leading to the emergence of a sort of “pedestrian highway”, where all people moving the same direction occupy on half of the street (on the preferred side), and those moving in the opposite direction occupy the other half. This self-organized phenomenon actually enhances the traffic efficiency and can be easily observed in crowded streets.