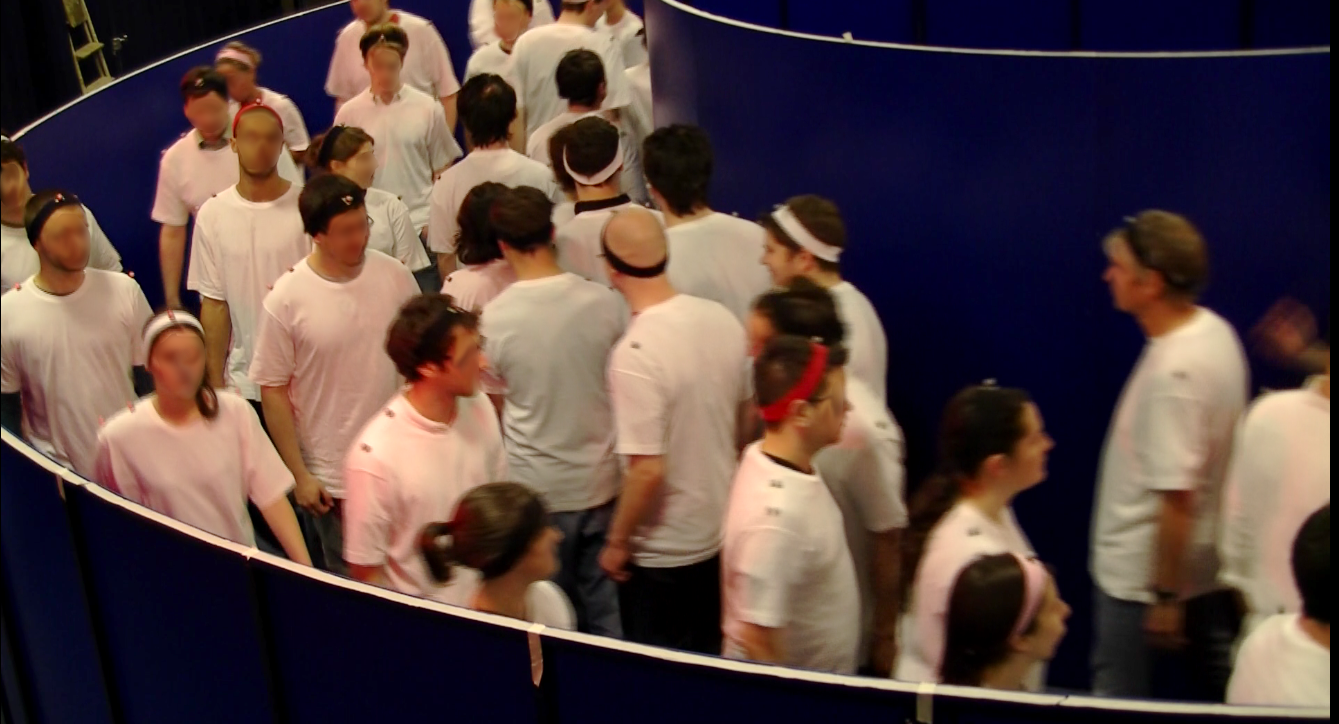 Recently, I have published a new article in PLoS Computational Biology entitled “Traffic Instabilities in Self-Organized Pedestrian Crowds“. This article is the result of the joint efforts of four different research groups: The CRCA in Toulouse (to which I was affiliated at that time), the INRIA-Bunraku in Rennes, the IMT in Toulouse and the LPT in Paris. This project was founded by the PEDIGREE project, a national research grant from the French ANR.

This project is an experimental investigation of the lane formation phenomenon. Lane formation is a self-organized pattern that appears spontaneously in crowds: When you have two flows of people moving in opposite directions (for example in a crowded commercial walkway), a sort of “pedestrian highway” sets up naturally, where people moving in the same direction occupy one half of the street and those moving in the other direction occupy the other half.

When it has been first observed in the 1970th and first reproduced by computer simulations in 1995, lane formation has been quickly labeled as a smart collective behavior, a nice illustration of the wisdom of crowds. In fact, this collective pattern is an efficient way of organizing counter flows to minimize avoidance maneuvers and frictions among people moving in opposite direction, just like cars in highways. The major difference with cars, however, is that highways of pedestrians are self-organized: They don’t require any specific centralized traffic rule. They appear naturally, when it’s necessary… That’s the magic of self-organization!

However, this phenomenon has never been studied in details… Is it as efficient as we like to think?

So, to answer that question, we have designed a big lab experiment to characterize the features of lane formation. For this, we hired up to 60 participants and put them in a large ring-shaped corridor. Half of them were instructed to walk clockwise, and the other half to move anti-clockwise. Participants were randomly located in the corridor at the beginning. At the starting signal, they started to move in their walking direction. As expected, it took about 20 to 30 seconds before the two opposite flows segregate almost perfectly, without giving the participants any specific instructions about that. A very nice emergence of order out of disorder, as it has been theoretically described in the study of self-organized systems. The video below shows an example of what we observed during  the experiment, after the tracking of pedestrians.

However, we observed something that was not initially predicted by the theory… As usual in science, things are not all black or all white. It’s always more complicated, always in between. After a certain period of order, during which two beautiful lanes were in place, the order suddenly broke down and the system went back to its initial chaotic state…. until the moment where the lanes reappeared once again, and so forth. This alternation of ordered and disordered states was observed in almost every replication of the experiment (except the one shown in the video above). Therefore, we came to the conclusion that the phenomenon of lane formation is unstable.
How can we explain these instabilities? Looking carefully at the data, we observed that the initial perturbation triggering the global break down of organization was due to a few individuals moving away from their lane. These individuals are fast-walkers, who got bored of walking at the slower pace of the group, and decided to overtake the person in front. By doing so, they end up facing the opposite flow and broke the wave, triggering a chain reaction that propagates all over the corridor. In fact, when people are walking one behind the other, they have to move at the speed of the slowest individual. But it’s very uncomfortable to move slower than your natural walking pace. Therefore, frustrated fast-walkers often move away from the lane, without realizing that this decision will affect everybody else in the near future!
Additional computer simulations show that the stability of the traffic organization is strongly correlated with the speed heterogeneity in the crowd. A crowd of people walking at a similar speed will work well. A crowd composed of fast and slow walkers will be disturbed.
But there’s a paradox in this business…. When the system is well-organized, the traffic efficiency is high. When the system is disorganized, the traffic efficiency is low. But the organization breaks down because some people try to move faster! Therefore, when trying to increase their individual walking speed, fast-walkers actually decrease the collective walking speed of the group. This is what we call a social dilemma, a situation in which collective interests are in conflict with individual interests.

These results can suggest some real-life applications to enhance the traffic efficiency and the walking comfort in crowded cities. For instance, dividing the pavement into a ‘‘fast lane’’ and a ‘‘slow lane’’ will reduce the speed differences among pedestrians, and therefore maintain stable and well-organized traffic flows. I heard about a urban project like that in Oxford street, London, but in practice, it is not sure that people will obey  such a constraining walking rule…

2 thoughts on “Walking with the flow”